Are You Being Served?

Edit
This article is about the original British sitcom. For other uses, see Are You Being Served? (disambiguation).

Are You Being Served? is a British sitcom broadcast from 1972 to 1985. It was set in the ladies' and gentlemen's clothing departments of Grace Brothers, a large, fictional London department store. It was written mainly by Jeremy Lloyd and David Croft, with contributions by Michael Knowles and John Chapman. The idea for the show came from Lloyd's brief period in the early 1950s working at Simpsons of Piccadilly, a clothing store which traded for over 60 years until 1999.[1]

The inspiration for the store has also been credited to Rossiters of Paignton department store from the time Lloyd and Croft spent there,[2] and the former Clements of Watford.

Over the course of its 13-year run, only Frank Thornton, Mollie Sugden, John Inman, Wendy Richard and Nicholas Smith appeared in all 69 episodes, and all later featured in the sequel television series, Grace & Favour (also known as Are You Being Served? Again!). In 2004, Are You Being Served? came twentieth in "Britain's Best Sitcom".

In January 2010 the BBC screened the show's pilot programme (seen in colour for the first time since the early 1970s)[3] alongside several tribute shows to the late actors who appeared in the series with BBC2 dedicating an entire night to the show.

Are You Being Served? featured humour based on sexual innuendo, misunderstandings, mistaken identity and occasional slapstick. In addition, there were sight gags generated by outrageous costumes which the characters were sometimes required to wear for store promotions, and gaudy store displays frequently featuring malfunctioning robotic mannequins. The show is remembered for its prolific use of double entendres.

The main humorous base of the series was a merciless parody of the British class system. This permeated almost every interaction and was especially evident in the conversations between the maintenance men and the ostensibly higher-class store personnel. The episodes rarely left the store, and to parody the stereotype of the British class system, characters rarely addressed each other by their first names, even after work, opting for their formal titled names ("Mr", "Mrs", "Miss", or even "Captain"). When they did address each other by their first names, it was almost always for a comical effect.

Main article: List of Are You Being Served? characters

Cast of Are You Being Served? 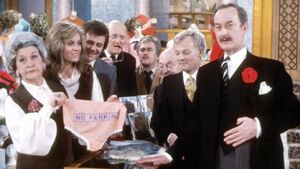 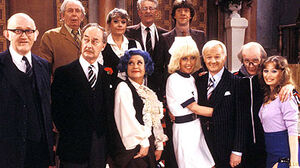 Main article: List of Are You Being Served? episodes

Are You Being Served? was first broadcast on 8 September 1972 on the BBC, in the form of a pilot for the series Comedy Playhouse. It only aired when it did because of free airtime created by the Munich massacre during the 1972 Summer Olympics. The pilot was reshown at the beginning of the first series on 14 March 1973. That first series was aired in the same timeslot as Coronation Street on ITV, and consequently received relatively little attention. However, repeats shown later in the year were much more successful.[4]

Although the pilot was produced in colour, the videotape was wiped in the 1970s leaving only a 16mm black-and-white film telerecording. In 2009 the pilot episode was restored to full colour using the colour recovery technique previously used for the Dad's Army episode Room at the Bottom. The restored version was first shown on BBC2 on 1 January 2010 as part of an 'Are You Being Served' special night. It is not currently available on any DVD release yet.

The show went on to receive huge audiences, with later episodes attracting up to 22 million viewers.[5] After 10 series, 69 episodes and a 13-year run, Are You Being Served? came to an end on 1 April 1985.

In addition, the cast performed in character for a stage sketch on the BBC1 programme Variety on 19 June 1976.

The theme song, written by the show's co-writer David Croft and composer Ronnie Hazlehurst, consists of a lift girl (whose voice was provided by Stephanie Gathercole) announcing each floor over the musique concrète sounds of a cash register (which basically serves as the only percussion instrument) and a simple musical accompaniment.

A remix of the theme was released in 1996 by a dance act calling itself "Grace Brothers",[6] and featured samples of John Inman and Frank Thornton.

There is a homage to the theme song in the Ladytron song "Paco!" from the album "604", and New Zealand band Minuit's "I hate guns". A version of the theme song is featured on the album The Ape Of Naples by the experimental music group Coil. The theme song has also been covered by Australian band Regurgitator on their 1999 album ...art. Pop singer Jamelia's song "Window Shopping" (from her 2006 album Walk with Me) begins with a sample of the familiar cash register sound effect as well as Mrs. Slocombe's voice inquiring, "Good morning, Mr Grainger; are you free?".

During its run, the series attracted some mild criticism for its reliance on sexual stereotypes and double entendres, including jokes about Mrs. Slocombe's "pussy" (cat) e.g. Mrs. Slocombe: "Animals are very psychic; the least sign of danger and my pussy's hair stands on end". John Inman's camp portrayal of Mr. Humphries as an effeminate man could easily be misinterpreted by viewers. Inman pointed out that Mr. Humphries' true sexual orientation was never explicitly stated in the series, and David Croft said in an interview that the character was not homosexual, but "just a mother's boy".[7] With a broad mixture of stereotypical gay characteristics, some apparent heterosexual attractions, and always picking up on ambiguous words such as queen, gay, and camp, viewers were left wondering about Mr. Humphries' sexual orientation. In an episode of the spin-off Grace & Favour, the character is further described as neither a "woman's man" nor a "man's man" and as being "in limbo".

Main article: Are You Being Served? (film)

In 1977, an Are You Being Served? film was released using the same characters and cast. It was set in the fictional resort of Costa Plonka, in Spain. The film was an adaptation of the very successful stage version of the show, which played at the Winter Gardens Theatre, Blackpool over the summer of 1976.

The series has become very popular in the United States on PBS stations and on BBC America, as well as in many Commonwealth nations around the world. A US adaptation pilot episode called Beane's of Boston aired on 5 May 1979 on CBS, but it didn't make it through a full season. An Australian version, also called Are You Being Served?, ran for sixteen episodes from 1980 to 1981. It starred John Inman as Mr. Humphries, June Bronhill as a character similar to Mrs. Slocombe, and Shane Bourne. The store's name was changed to Bone Brothers, as Grace Brothers was the name of an actual department store chain in Australia. The show was aired in Canada during the late night on YTV.

In 1992, most of the original cast reunited for a spin-off show called Grace & Favour. This series was called Are You Being Served? Again! in the United States and Canada.

Seven early episodes were novelised for a book, written by Jeremy Lloyd, called Are You Being Served? – Camping In and other Fiascos. This was written in 1976, and republished in 1997 by KQED Books. The seven episodes featured are Camping In, Up Captain Peacock, Wedding Bells, His and Hers, Coffee Morning, The Hand of Fate and The Clock.

In 1995, KQED Books published Are You Being Served – The Inside Story by Adrian Rigelsford, Anthony Brown, and Geoff Tibbals, with a foreword by Jeremy Lloyd, and sub-titled: "The Inside Story of Britain's Funniest – and Public Television's Favorite – Comedy Series". In 212 pages, the book's six chapters cover: The Cast of Characters, Behind the Scenes, The Episodes, The Spin-offs, Trivia Quiz, and Glossary. ISBN 0-912333-04-9.

In 1999, I'm Free! The Complete Are You Being Served?, a guide to the series, was published by Orion Books. It was written by Richard Webber, with contributions from David Croft and Jeremy Lloyd.

A board game was also produced in the 1970s. Players moved round a board resembling the shop floor to purchase one item from each of the four counters and leave the store, before their opponents and without going over budget.

All Ten Series, including both the black & white and colour versions of the pilot episode and all five Christmas specials from those years, are now available on DVD in the UK (Region 2). Are You Being Served: the Movie was released in 2002.

All ten series, as well as both series of Grace & Favour (in packaging titled Are You Being Served? Again!) and the film are available on DVD in Region 1 (North America).

All ten series, as well as both series of Grace & Favour (in correctly-titled packaging) and the film have been released in Australia (Region 4).